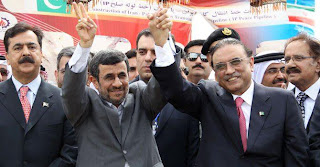 Lately, Pakistan has made two very bold but strategic decisions, which will never be liked by regional and global super powers. These are: 1) transferring management of Gwadar port located in Balochistan to China and 2) ground breaking and initiating work on Pakistani side of Iran-Pakistan gas pipeline.
This ceremony was jointly performed by Pakistani and Iranian presidents. Both presidents were accompanied at the ground-breaking by delegations comprising ministers, top officials as well as representatives of several Arab states.
While Pakistanis have appreciated both the decisions, certain quarters within and outside Pakistan are extremely announced. In fact the opponents just don’t want the two neighbors to enjoy amicable and mutually beneficial relationship.
Among the opponents United States is at the top and many of the countries from Arabian Peninsula are also playing the US mantra. Some of them even term ‘Iran a bigger threat as compared to Israel’. These countries are extending full support to the United States to crush Iran by imposing sanctions and continuing ban on export of its oil. Iran is among the top three largest oil producing countries.
One can understand hue and cry of India on the transfer of management control of Gwadar port to China. The reason is simple; India has invested billions of dollars on the construction of Chabahar port, rail and road links up to Central Asia via Afghanistan.
If Gwadar port becomes fully operational importance of Chabahar port would be undermined to a large extent. However, this was known to India when it initiated the project. However, developing an alternate route up to Central Asia via Afghanistan was considered a must and India was fully supported by the United States in this endeavor, at no stage India was even warned of possible sanctions.
Withdrawal of Nato combat soldiers, armaments and other sensitive equipment has started through Pakistan, which is not liked by India because no traffic is being diverted to Chabahar port.
In such a scenario involvement of Indian intelligence agencies in any sabotage activities in Pakistan can’t be ruled out. Repeatedly, it has been established that the perpetrators are neither Taliban nor the members of any other militant outfits.
Those who attacked Peshawar airbase were certainly not Taliban and so were those who attacked Mehran Naval base in Karachi. Similarly, burning of houses of Christians was also an act of those who want the international community to show that minorities are not safe in Pakistan.
It is on record that parts of many Muslim countries have been axed to create countries for minorities. These groups are already busy in creating disturbances in Bangladesh.
Pakistan’s enemies know well that its economic activities can only be brought to grinding halt by creating unrest and disrupting economic activities.
Completion of Iran-Pakistan gas pipeline and construction of mega oil refinery at Gwadar will establish Pakistan as energy corridor.
China certainly has economic interest because using Gwadar port will reduced the distance to less than 2000km from existing around 6,000km. This will not only help in saving billions of dollars freight but also ensure security of the products being carried.
Many of the countries, including United States and India don’t approve this arrangement. Pakistan will not only get access to energy supplies but will also be able to earn millions of dollars as transit fee.
On top of that Pakistan will also be able to offer efficient and cost effective transit facilities to Afghanistan, which will undermine importance of India.
Over the years and during the war on terror Pakistan has been meeting energy requirement of Nato forces. As such Afghanistan has no oil refinery and it is likely to remain dependent on Pakistan for many years to come.