Tattoos on the body of attackers on Peshawar Airport 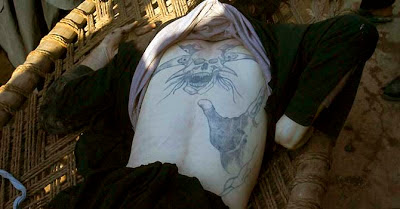 Experts have been advising the Government of Pakistan (GoP) to pull itself out of the proxy war being fought in Afghanistan. If the purpose of attack on Afghanistan was to kill the phantom called Osama bin Laden, the game was over a year ago.
Now the struggle is to keep in power a puppet government headed by President Hamid Karzai and create justification for keeping troops in Afghanistan, till the ground is prepared for undertaking an assault against Iran.
Pakistanis clearly understand the difference between good and bad Taliban also the reality of its offshoot, Therik-e-Taliban Pakistan. Certainly the bad Taliban are those who are still fighting against occupying US-led Nato forces. Those are also against cultivation of poppy in Afghanistan.
Good are those Taliban which are helping Nato forces and also giving protection and facilitating drug trade. Therefore, being a Muslim is not a reason to join the clan of booty collectors, who still prefer to call themselves Taliban to fool the innocent and simple Afghans, who still consider themselves Mujahideen, fighting ensuring supremacy of Sharia rules.
This point became crystal clear when the bead bodies of those who undertook attack on Peshawar airbase were shown to media. Presence of tattoos on the bodies of those killed has given a new dimension to the investigators. Very large tattoos engraved on the back of two foreign fighters read “angel of death” and “Satan” which certainly has no meaning for a Muslim.
Taking a quick account of some of the incidences taking place in Pakistan clearly suggests “Perpetrators are not Muslims but operating under the disguise of Taliban. The sole objective of these perpetrators is to fragment Pakistan on the basis of language, religion and even sects, initiate civil war and plunge the country deep into civil war.