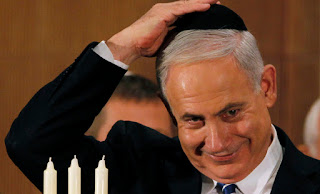 It is often said that most of the Israelis are now tired of living in a constant state of war and want to live peacefully with Palestinians. There is also a talk that if peace could be negotiated with Palestinians by accepting ‘two states’ policy and vacating some of the occupied areas, it is a point worth considering. To achieve this objective ‘war mania’ has to be gotten rid off. In this endeavor Benjamin Netanyahu is considered the biggest hurdle.
Israeli Prime Minister Benjamin Netanyahu, who is contesting election for another term has come under sever attack by Yuval Diskin, a prominent Israeli ex-intelligence chief. It was an unusually strong and overt assault on Netanyahu by a figure from the security establishment, coming less than three weeks before the January 22 election. The election campaign has hardly touched on security issues like the conflict with Iran or the stalled peace process with the Palestinians, focusing almost entirely on domestic issues.
He accused Netanyahu of acting illegally by ordering the security apparatus to prepare for an attack on Iran before gaining former approval by the cabinet of ministers. He also said Netanyahu squandered the gains made by Israel`s security forces by not using a period of relative quiet over the past few years to move toward peace with the Palestinians. Diskin said Netanyahu acted irresponsibly regarding Iran`s nuclear program and accused him of prioritizing personal concerns over national interests.
He accused Netanyahu who wanted to go down in history as someone who did something of the same proportions as two of his predecessors had done.  He also stated, “I have a very strong feeling that with the Iranian issue Netanyahu is haunted by two former Israeli Prime Ministers, Menachem Begin, who attacked the reactor in Iraq and Ehud Olmert, who, as it is claimed in many places, attacked the reactor in Syria”.
While resistance against Netanyahu is on the rise, the recent poles tell the contrary. He is being hinted the most popular and likely to win the election for another term. It seems that power brokers are active and trying to create the hype that unilateral attack on Iran has become a must. This is a policy some radicals are following after having faced repeated defeats from those who are being supported by Iran, be it Lebanon or Syria.
Apprehensions have been expressed repeatedly that as the date for withdrawal of forces from Afghanistan is getting closer, a new front has to be opened to keep the combat soldiers busy. The front has to be opened by attacking Syria or Iran. The only worry is that the Syrian regime could not be toppled in nearly two years and entering into direct encounter with either of the country could prove real punitive.
Over the months Russia and China have been opposing direct encounter in Syria and also resisting impositions of newer economic sanctions on Iran. Independent analysts are of the view that economic sanctions have failed to deter Iranians from their nuclear program, which they claim to be peaceful. While both the United States and Israel consider Iran a major threat, talks about maintaining working relationship for securing peace for Israelis is getting louder. Some critics even go to the extent of saying that any ill-planned attack on Iran could put the very existence of Israel at risk and cause serious damages to the United States also.
Courtesy: The Financial Daily