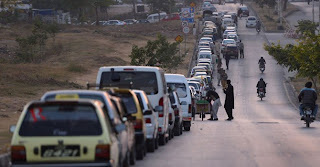 Supreme Court of Pakistan has recently fixed per kilogram price of CNG at Rs54.16. While owners of CNG stations say that selling gas at the price fixed by the apex court leads to per KG loss of Rs16, Oil and Gas Regulatory Authority (Orga) has failed in convincing the court as well as the owners of CNG stations on a mutually acceptable price.
While the legal battle is likely to continue for a while, consumers face the worst miseries because deliberations are being made on other issues, rather than arriving at a price that is acceptable to all the stakeholders. It is single line agenda and all the stakeholders have to agree on a mutually acceptable price at the earliest rather.
A news item posted on the website of daily Dawn says the Supreme Court on Wednesday rejected a request submitted by the CNG station owners seeking an increase in the price of CNG and sought records pertaining to the details of tariff accounts.
This raises a question did the apex court fixed the price arbitrarily? To be honest no one could suspect this and strongly believe that court had done this on the basis of authentic data provided to it by the concerned authorities. However, one just can’t abstain from saying that those having vested interest are trying to mislead the honorable court.
According to the news report the court sought records pertaining to the tariff accounts of 3395 CNG stations, pointing out the existence of filling stations operating without licenses and asked four questions in this regard. The court also inquired about the number of license requests rejected by Ogra and the number of licenses ‘pocketed’ by station owners. In his remarks, Justice Khawaja termed the CNG association a cartel, adding that, the government appeared to oblige to the demands made by the cartel.
One can very humbly suggest to the court that its attention must remain focused arriving at a mutually acceptable price rather than venturing into uncharted waters. It has been heighted in one of the previous posts that the GoP is collecting Rs20.50 as levies and taxes on one KG of gas, whereas the cost is just Rs28.50. The recently imposed DIDC alone is Rs10.95 per KG. If these numbers are correct it is the Government of Pakistan fleecing the consumers and not the CNG cartel, as described by an honorable judge.
Experts suspect that those having vested interest are misleading the court, else fixing the price does not require any rocket science. The price being paid by gas marketing companies to exploration and production companies is on record and the tariff being charged from CNG stations fully documented as well as various taxes and levies imposed.