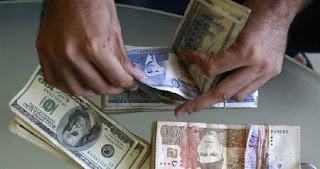 Many of the experts had expressed fears that soon a person would have to pay Rs100 to buy a US dollar and it was linked to hike in crude oil price which would also touch US$100/barrel. They had warned if this happens Pakistan’s economy would come under severe stress. Both the forecast have come true and it is to be seen how the whiz kids of Pakistan will behave?
The much expected copybook reply will be “Pakistan’s economy is under extreme stress because of ongoing war on terror, country’s sensitive installations are under attack, multilateral financial institutions have not been very supportive and above all the embedded enemies are causing more losses than the external conspiracies”. Most of these are true one way or the other but there is hardly any acknowledgement that rulers have been too busy in ‘honeymoon’, policy planners complain last minute change in the policies and no one seems to be ready to take corrective steps.
Pakistan’s foreign exchange reserves have not carbonated overnight, it was writing on the wall. The country faced two contentious issues: 1) shrinking exportable surplus and 2) eroding competitiveness of local exporters. The cause is common, omnipresent energy crisis. Experts are of the consensus that the demand has not exceeded supply but inefficiencies and mismanagement is the mother of all evils.
It may also be sad that over five years foreign direct investment has dropped to dismal level. The reason are also known to all that 1) if existing productive facilities are not operating at optimum capacities, no entrepreneur would be keen in investing, 2) if local entrepreneurs are shy no foreign investors would look towards Pakistan and 3) if law and order situation is precarious investors in search of safe heavens will not be comfortable about the security of their investment.
The best evidence is that every investor knows that Pakistan needs billions of dollars in the investment because the country is ‘energy corridor’ and there is also needs to invest in oil and gas exploration, construction of LNG terminal, revamping of electricity and gas transmission and distribution networks but no investment is being made. The reason is also known ‘failure of the government to resolve the circular debt issue’.
Even bigger problem is that policy planners believe that some savior will come and remove all the odds. In the past United States has been the savior but the country has to pay a huge cost. Savior of the past is already disbursing for the power sector but most of the eyes are set at release of millions of dollars from the coalition support fund.
As US-led Nato forces are getting ready to vacate Afghanistan, Pakistan will soon be asked to play to protect the US interest in the country that has been in the state of war for more than four decades. However, the latest assault of terrorist under the disguise of Taliban makes many Pakistan jittery. The dollars may flow but not without more attacks on Pakistan’s sensitive installations.
In the prevailing scenario, where the very existence of Pakistan faces serious threats, a home grown plan has to be prepared to contain trade deficit and improve current account position and avoid accepting aid that may subjugate country’s sovereignty.