Pakistan in the grip of terrorists 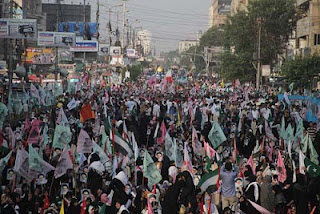 On the last Friday of Ramadan in Pakistan killers were on the rampage, especially in Karachi capital of Sindh and Quetta capital of Balochistan. Earlier Kamra Air Base was attacked and nearly two dozen Shias were killed point blank in KP province. Though, on the face value these appear separate incidents but establish a common point ‘security forces in Pakistan are incapable of protecting Pakistanis as well as strategic installations of the country.
Many local and foreign analysts term these ‘security lapse’ but the reality is Pakistan in a state of war for more than a decade. Despite doing the best it has to hear ‘do more manta’ from the United States and face the pressure of ‘domestic constituency’ to pull the country out of proxy US war. There is growing perception that Afghan occupation by Nato forces may have other motives but bringing any change in the quality of life of Afghans, bearing the brunt of war for more than three decades. Some even go to the extent of terming it war of drug barons.
In the recent past Shia Hazaras have been the worst victim in Balochistan but now killers are on the rampage in KP and GB. For a considerably long time efforts are being made to show that that Shias and Sunnis are killing each other. However, with the Shia-Suni conflict becoming too visible in Bahrain and Saudi Arabia, efforts are being made to instigate armed conflict between the two Muslim sects in Pakistan also.
Attack on the bus carrying participants of Youm-e-Qudus Rally in Karachi was to convey a message that any group following Iranian plan can face death in Pakistan. However, the cynics fail to understand that it is not the attempt of Iran to create its hegemony in the region but to remind the Muslims that Israel is occupying Palestinian territory for decades and Arabs have failed in getting the holy city of Jerusalem free from Zionist occupation.
Many Western critics say that Iran has expansionist designs and attaining uranium enrichment technology is the first step for producing atomic warheads. Though, Iran has been refuting this allegation, United States under the pressure of Zionists want to teach it a lesson. More than 32 years of economic sanctions have failed to deter Iranians from their path. In fact Iran has emerged as a symbol of resistance against the US hegemony.