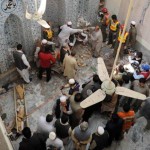 Yesterday (Friday) can be termed one of the blackest days of Pakistan when terrorists gave another blood bath to different cities of the country. Various groups have either claimed responsibility of these attacks or some of the groups can be alleged for these. The worst point is that while the rampage continues no political party has raised voice for taking the sternest action against the perpetrators.

PML-N government headed by Mian Nawaz Sharif still wants to negotiate with Taliban, despite the fact that its offshoot Tehrik-i-Taliban Pakistan (TTP) continues creating the worst mayhem and turning law and order situation real precarious. A quick look at the incident taking place in quick succession forces one to infer that these outfits are the puppets and their strings are controlled by some external forces that are adamant at plunging the country into anarchy. This has been pointed out repeatedly but it seems that law enforcing agencies are not allowed to take any action against these perpetrators.

On Friday militants armed with guns and rockets killed two members of pro-government militia and wounded two policemen in tribal Bajaur district close to the Afghanistan border. According to media reports about a dozen insurgents attacked the homes of two tribal elders near Khar. A security official confirmed the attack, resulting casualties and that target were the tribal elders.

In an incident in Karachi gunmen shot dead an MQM provincial assembly member, his son and a passerby outside a mosque. Member Sindh Assembly, Mohammed Sajid Qureshi and his 25-year-old son were targeted in a drive-by shooting as they left the mosque after attending Friday prayers in the congested North Nazimabad neighbourhood.

Immediately MQM announced three days of mourning throughout Pakistan in protest of the killing of its lawmaker and by the late evening city came to grinding halt. The party had appealed to businessmen, traders, industrialists, retailers and transporters to keep their businesses closed on Saturday in protest of the assassination. Party leader Abdul Rasheed Godil informed that MQM would boycott the National Assembly proceedings until serious steps were taken to stop target killings in Karachi.

In yet another incident at least 14 people were killed and several injured in a suicide attack on a seminary and mosque in Peshawar. Reportedly the suicide bomber detonated his explosives in the mosque when Friday prayers were offered. Initial reports say the attacker wearing a suicide vest entered the mosque and blew himself up. The three attackers tried to enter Hussaini madressa in Chamkini area but faced resistance by the security personnel posted at the entrance. While two attackers were prevented from entering the complex, one managed to enter the Imambargah after the guards were gunned down. It is estimated that six to seven kilograms of high intensity explosives and four kilograms of pellets were used in the blast.

Notorious militant organization TTP has claimed responsibility for the attack on a military convoy on Wednesday in Peshawar in which at least six military personnel were killed. The TTP spokesperson said that security convoy was attacked in retaliation to the killing of its senior leader Waliur Rehman in a US drone strike on May 29.  The spokesperson claimed that intelligence and ground information was being provided by Pakistani authorities to facilitate drone attacks and it is for this reason they would continue targeting security personnel.

While BLA was alleged for attacking Ziarat Residency, Lashkar-e-Jhangvi has was prompt in claiming responsibility of killing of female students and taking into siege Bolan Medical complex. They had also claimed responsibility of carnage in Karachi last year.

The situation demands immediate action against the perpetrators. However, a point of concern is that most of the political leaders have not demanded such action and are still mincing their words. Experts believe that terrorist have taken the entire country hostage and if no action is taken against them more people will be killed in carnage and sabotage.