Israel must be brought back to its original size 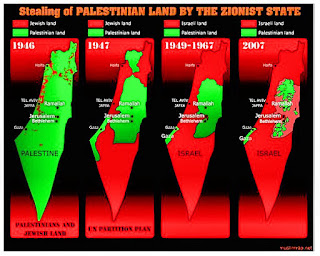 The latest announcement of Israel to build 3000 new settlement homes on occupied land is a slap on the face of international community that has just recognized Palestine State, accepting the philosophy of two sovereign states, Israel and Palestine. The latest announcement once again proves that Israel is a usurper and also responsible for any realization by Palestinians.
If the international community, particularly United States wants Palestinians to behave diligently,  they must asked Israel to stop construction of settlements of occupied land also bring Israel back to its original boundaries demarcated at the time of creation of a state for the Jews.
Israel’s moves serves as a harsh reminder to Palestinians that while they now have a state on paper, most of it remains very much under Israeli control. “This is a doomsday scenario,” Daniel Seidemann of Ir Amim, a group that promotes coexistence in Jerusalem, said of the building plans.
Israel’s decision also embarrasses the United States, which was among just nine countries in the 193-member General Assembly to vote against accepting Palestine as a non-member observer state. State Department spokeswoman Victoria Nuland criticized the Israeli announcement. “These actions are counterproductive and make it harder to resume direct negotiations or achieve a two-state solution,” she said.
Among the projects is an expansion of Maaleh Adumim, known as E-1. Successive US administrations have pressured Israel not to build in E-1 because it would effectively cut off east Jerusalem from the West Bank, and split the northern part of the territory from the southern part. “E-1 will be the death of the two-state solution,” said Seidemann, referring to the establishment of a state of Palestine alongside Israel.
Tzipi Livni, Israel’s former foreign minister and chief negotiator with the Palestinians warned that “The decision to build thousands of housing units as punishment to the Palestinians only punishes Israel … (and) only isolates Israel further.”
Following Israel’s decision to accelerate settlement building, however, Abbas aide Saeb Erekat said the Palestinian leadership was studying its options. He would not elaborate. Erekat accused Netanyahu of “defying the whole international community and insisting on destroying the two-state solution.”
The UN endorsed a Palestinian state in territories Israel captured in 1967. Abbas has said he is ready to negotiate the final borders with Israel, provided Netanyahu drops his refusal to use the 1967 lines as a starting point. Abbas asserted Friday that a Palestinian demand for a settlement freeze ahead of negotiations still stands.
On the Israeli side, compromise on settlements seemed unlikely. Netanyahu is seeking re-election two months from now at the helm of a Likud party turned more hawkish since primaries earlier this week and in an electoral alliance with an ultra-nationalist pro-settler party.