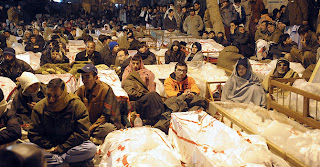 Many of the Baloch tribal chiefs have been demanding creation of an independent Balochistan because the federal government is not giving them their basic rights.
However, complete apathy of the provincial government towards ongoing Quetta sit in against genocide of Shias shows that the ruling elites are the most ruthless.
The protestors have spent two nights in open despite extremely cold wind and even rain. The most disgusting part is that the relatives are sitting with the coffins of loved one and refuse to bury them till control of Quetta city is handed over to Pakistan Army but no one is listening to them.
While Governor Balochistan has expressed his helplessness, provincial chief minister appears to be an absconder. In the provincial assembly most of the elected members are tribal chiefs and there is also a long list of ministers but none has bothered to even express sympathy to the grieved ones.
The protestors are demanding immediate handing over of Quetta city to Army, the response from GHO has not come as yet. A foreign news agency report exhibits the prevailing state of apathy. It says, “However, in Rawalpindi, where the military’s headquarters are located, there was silence. There was no word from the military that has been called upon to take over Quetta and which has been criticized by many in the past 48 hours. An ISPR official said the army can be called in by the civil administration and the provincial government”.
People have a right to ask, if the provincial government is pitiless, isn’t this the responsibility of the federation to move the army so that these coffins can be buried?
The entire ruling junta was obsessed with long march of a religious cleric. The response of civil society was also lukewarm but over the last 24 hours support of Altaf Hussain and Imran Khan for the Hazaras has created some waves. Demonstrations in the support of assassinated are being staged throughout Pakistan, the largest and the most organized being a sit in near Governor House in Karachi.
Main media attracted a lot of criticism for spending hours on killing of a youth but paying little attention to the biggest genocide of Pakistan’s history. A report says, “As the devastated Shia protesters in Quetta continued their vigil over the unburied bodies of their loves ones, their grief was felt across the country as members of the Shia and Hazara communities and civil society came out on the streets of various cities of Pakistan on Saturday”.
However, the critics must not forget that reporters and crew members of television channels have been killed and severely injured in these attacks.
Genocide of Shia Hazaras has been going on in Balochistan for decades but has attained an enormous quantum never witnessed in the past. On last Thursday four bombs were detonated in Quetta in which more than 100 people, mostly Hazaras were killed and double the number was injured, some of them critically injured.