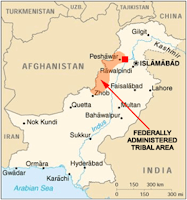 According to an oilprice.comEnergy Intelligence Report Pakistan’s tribal areas are believed to have massive reserves of oil and natural gas—which Pakistani officials have suddenly become very keen to demonstrate. But this is a highly restive, war-torn area where one right move could make all the difference, and one wrong move could ignite a conflict with irreversible consequences.
For now, the area remains unexplored and it was only in 2008 when Pakistani geologists began to study the area in earnest, with the support of the local authorities. The results of this research were collected, processed and digitized in June 2012. The geologists discovered seven new oil and gas seepages during the mapping. The geologists also claim that 11 oil and gas exploration companies have already reserved 16 blocks in the Federally Administered Tribal Area (Fata).
Geologists say the area, bursting at the seams with gas, is poised to become a ‘new oil state’ whose production could rival Dubai’s in only five years.

The interest is evident from: 1) seventeen (17) companies have initiated operations in Khyber, Orakzai, North and South Waziristan, Peshawar, Kohat, Bannu, Tank and Dera Ismail Khan), 2) Tullow has been active in Pakistan since 1991, but since 2008 it has sought to transfer its Asian licenses to focus on Africa and the Atlantic Margin, 3) other players include Mari Gas Company (Pakistan), HYCARBEX (part of American Energy Group ), Saif Energy (Pakistan), MOL Pakistan Oil and Gas, Orient Petroleum International (Ocean Pakistan/Cayman Islands), ZHEN (China), and others and 4) Oil and Gas Development Company (OGDC) of Pakistan is set to begin exploratory drilling in the area soon.

The report has also talked about Gwadar port. In terms of infrastructure, China has been the chief architect, and investor. China has already invested around $300 million in the deep water Gwadar Port close to Gulf of Oman.
Construction began in 2002 and the goal was to make this port a transit hub for landlocked countries (Afghanistan and Central Asia) and to boost transit from the Persian Gulf to East Africa. China plans to invest a total of $1.6 billion in the port—so far it’s cost $200 million to build the first three berths, which can handle $2 billion in cargo annually.
Despite its capacity, cargo has been slow to move through this port, largely because it’s not connected to the rest of the country.