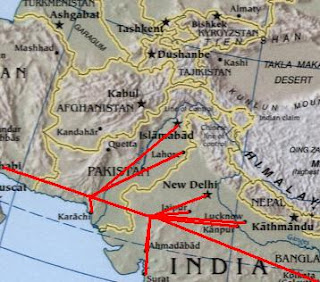 Failure to complete Iran-Pakistan (IP) gas pipeline in five decades can be termed the biggest tragedy for the two neighboring countries, one rich in energy and other suffering due to its paucity. The two counties enjoyed extremely cordial relationship with the United States, till the monarchy was toppled in Iran.
While Pakistan has been fighting a US proxy war in Afghanistan for the last four decades, it was neither allowed by the super power to go ahead with IP project nor was it treated at par with India when it came to offering ‘nuclear technology for civilian use’.
While peeping into the history may have many surprises for those who still believe that the pipeline will be constructed, one can safely infer that unless US-Iran relation improves it is ‘hoping against hope’.
Last minute cancellation of visit of Pakistani president to Iran to meet Malala Yousufzai in UK has put the last nail in the coffin, removing that may take decades.
This reminds Pakistanis another horrendous mistake of fifties when visit of Prime Minister Liaquat Ali Khan to USSR was cancelled and he instead went to United States, for which the country had to pay a huge cost.
In the post Islamic revolution era, relationships between Iran and United States have deteriorated because of imposition of economic sanction on the country for more than 32 years. Experts don’t expect any change and hoping that any improvement is day dreaming.
On the contrary some of the conspiracy theories suggest that one day Iran will be punished for not bowing down before the US pressure. A proxy was initiated in Syria more than 20 months ago and another test was conducted through Hamas-Israel encounter but seems the time is not ripe to undertake US-sponsored attack on Iran.
Lately, Pakistani Foreign Minister Hina Rabbani Khar said President Asif Ali Zardari would soon visit Iran and the gas pipeline project would be completed in given time frame. She also said Pakistan and Iran have been enjoying good relations and the present government has further strengthened its ties with the neighbor. However, a closer look at the timeline should remove any ambiguity, if it still prevails.
Imposition of new economic sanctions on Iran clearly suggests that the country is denied the right to export crude oil only to keep Arab producers happy and create a justification for Turkmenistan-Afghanistan-Pakistan-India (TAPI) gas pipeline sponsored by the United States.