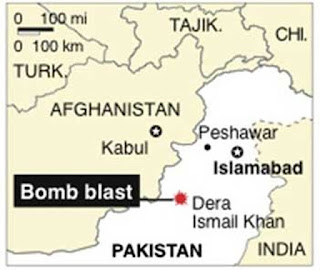 Ashura procession in D I. Khan, a city close to Afghan border faced blast today, causing six deaths and serious injuries to fifty persons.
Mourners were attacked yesterday in which nine persons were killed.
The blast took place despite claims of foolproof security system.
It is being reported that improvised explosive devices (IEDs) have been used in both the incidents.
While people have faith in the security forces, there are growing suspicions that perpetrators have been supplied state of the art devices by foreign forces.
The objective is to prove that the government is helpless before perpetrators.