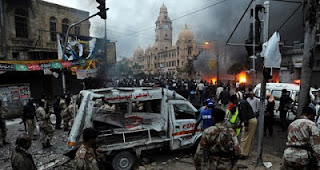 One often feels that most of the statements regarding terrorists, their game plan and involvement of third hand are nothing but acceptance of the fact that perpetrators are smatters than people working for law enforcing agencies. One also gets the feeling that mantra of involvement of ‘third hand’ is only to close the file rather than taking the pain to investigate, round up the criminals and giving them exemplary punishment. One of the conspiracy theory is that ‘militants, to be precise perpetrators, are embedded in law enforcing agencies. If that is the reality, one does not know who can establish government’s writ.
To begin with one point has to be made very clear that putting the blame on external forces is accepting failure of the law enforcing agencies. If perpetrators can just walk into Pakistan from any neighboring country and manage to reach as far as Karachi, it is a big question mark on the performance of more than three dozens of intelligence agencies operating in Pakistan. This also highlights the inherent weakness of the surveillance system. While one could find police collecting ‘Bhatta’ on main arteries, roads and even streets, one completely fails to understand why the criminals can’t be intercepted? May be the police is keener in collecting the booty rather than checking the movement of criminals.
Same goes for the arms, which is pouring into Karachi in tons. It is said that that arms are made in United States, dissolved USSR and India as well as from smaller arms factories operating in the tribal areas. The influx of most lethal and modern arms into Karachi also raises question about the performance of law enforcing agencies. Politicians often demand de-weaponization of Karachi but hardly bother to find out how the weapons reach Karachi. One of the suspicions is that trucks and trawlers carrying goods for northern parts of the country bring the arms to Karachi.
Another conspiracy theory is that vehicles taking Nato supplies to Afghanistan carry the arms on their return journey. Some of the cynics even to the extent of saying that a large percentage of arms, meant for distribution among various groups operating in Afghanistan never leave Pakistan. There are ‘rent a weapon’ operators located throughout the country and carrying arms while crossing border or moving from one city to another is not necessary. These vendors are located in the heart of most thickly populated areas having concentration of different ethnic groups. It is also alleged that residents of the areas are also used as ‘human shields’ and often personnel of law enforcing agencies are hesitant in entering these areas.
A closer watch on the recent happenings and working of rebel groups has established beyond doubt that their sponsors provide them funds as well as arms and also give them training. If rebel groups in Syria have anti aircraft guns and missiles, possession of similar equipment by perpetrators in Pakistan just can’t be rules out.
It is suspected that various militants groups operating in Pakistan get support from external sources. It may not be wrong to say that a proxy war is being fought in Pakistan. The missions include from establishing supremacy of Shariah laws to liberation of oppressed groups and from creation of independent Pakhtunistan to Greater Balochistan. One of the outfits ‘Jundullah’ wears different caps. In Pakistan it is said to be working for the liberation of Balochs and in Iran it is fighting against Shias, who have usurped rights of Sunnis.
Courtesy: The Financial Daily