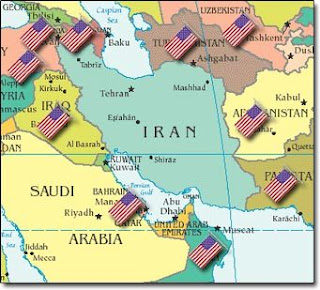 There exists an overwhelming perception that Gulf States like Saudi Arabia and Kuwait are deeply worried about Iran and ask the United States to take care of the problem.  The usual causes of conflict are cited to be Sunni-Shiite divide, Iranian subversion, its support for Hezbollah, and omnipresent fear about Iran’s nuclear energy program.  United States has been successful in creating these fears and also doing well in projecting Iran as a growing monster that can eat Arab monarchs.
Reading an article of Stephen M. Walt printed in Foreign Policyreveals that oil producing Arab countries are keen in keeping oil prices high to finance budgets in a period where heightened social spending and other measures are being used to insulate these regimes from the impact of the Arab Spring. According to the IMF, these states need crude prices to remain above U$80 a barrel in order to keep their fiscal house in order.
The Article also discusses the potential interest of Saudi Arabia that wants to keep Iran in the doghouse, so that Iran can’t attract foreign companies to refurbish and expand its oil and gas fields and also make it more difficult for Iran to market its petroleum in the global markets. It is but obvious that if UN and other sanctions are lifted and energy companies start operating freely in Iran, its oil and gas production would boom, overall supplies would increase, and the global price would drop.
If this happens Iran can emerge a more formidable power in the Gulf region but lower oil and gas prices would make it much harder for Saudi Arabia and other Gulf states to stave off demands for political reform through social spending. Saudi Arabia could cut production to try to keep prices up, but that would still mean lower overall revenues and a budget shortfall.
When one hears how worried the Gulf states are about Iran, and how they support the efforts to keep tightening the screws, remember that it’s not just about geopolitics or historical divide between Sunnis and Shiites or between Arabs and Persians. It is only to keep inflow of petro dollars high but why should United States be conniving with Arabs?
However, Stephen forgot to mention one point.  By keeping Iranian threat high United States is able to sell more arms to Arab countries. It is on record that United States is the biggest arms seller in the world and Arab monarchies are the major buyers, Saudi Arab being the biggest buyer.
Diverting attention of Arabs towards Iran also helps in saving Israel. At a recently held conference some of the Arab countries termed Iran a threat bigger than Israel. In the latest bid of the United State is fully supported by Arabs to topple government in Syria, and earlier in Libya. Over the years Arabs have been giving charity to Palestinians living in refugees’ camps but not supporting in the creation of a sovereign Palestinian state.