Sit in against Shia genocide in Karachi 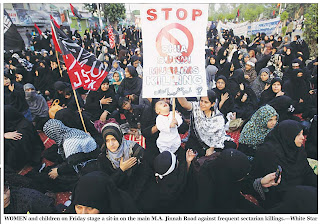 Numaish Chorangi at Karachi in Pakistan seems to have become Tehrir Square.  It is one of the unique displays of commitment and solidarity that a sit in against killing of Shia in Karachi now surpass 34 hours. The sit in, which began after Friday prayers, continues as the protesters refused to disperse, calling it a sit in for an indefinite period.
Strangely mainstream media is not giving enough coverage of the event but regular updates and photographs are being posted at social media. The point most emphasized is gathering of women and children in such a large number despite chilling nights.
One of the posts says, “Amazing sit in protest going on at Numaish Chorangi against Shia Genocide since the last 32 hours or so, was there for a good 3, 4 hours, wish people from all communities can join in to support a call against injustice concerning humanity and our country, even for just 10 minutes”.
On Saturday Karachi gave a deserted look. Fear and panic that began spreading in the city on Friday evening failed to deter the demonstrators. Young men riding motorcycles forced closure of shops and markets. Life in Karachi remained at a standstill as public transport remained off the roads.
The participants are present at Numaish Chorangi. It looks Incredible because hardly so many women come out to protest. According to some eyewitnesses the number of demonstrators exceeds 50,000. These people are demanding an operation against the banned outfits killing Shia.
Shias are being targeted regularly by Tehrik-e-Taliban Pakistan; the latest attack was at Ashura procession in D I Khan. In the prevailing conditions gathering of such a large number of people demonstrates strength of their faith.