Karachi blasts a prelude for change 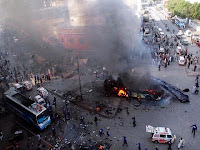 Situation in Karachi looked far from satisfactory after the second blast on Tuesday; the first one was on Sunday. In fact three provincial capitals, except Punjab came under attack starting Saturday. Whoever may claim the responsibility of these attacks, one point is clear that certain groups are not at all happy with MQM extending any support to Tahir ul Qadri. Imran Khan has been talking about tsunami but Tahir seems to have created real tremors.
As the date for setting up a caretaker government is reaching closer, it seems certain elements wants to create a situation so that elections could be postponed for an indefinite period; on the pretext that situation s not conducive for holding general elections is Pakistan. But a question bothers even the political pundits; can Qadri become a serious threat for other political parties, especially PPP, PML-N and PTI?
Most of the pundits didn’t consider Qadri a threat till he held his public meeting at Lahore that attracted a large number of people. Those believing in conspiracy theories were quick to say that Qadri was being supported by ‘power brokers’. Even a defamation campaign started against him on the social media. The harsher are comments becoming the greater is the feeling that Qadri has attained a position to influence the next general election and even formation of the interim set up.
Historically, Punjab is considered the stronghold of PML-N, Sindh excluding Karachi and a few other major cities that of PPP and MQM having strong position in urban areas of Sindh. In fact some political pundits say that no party can form government at federal as well as provincial level without the blessing of MQM. In such a scenario if MQM prefers Qadri over other, the situation can get real precarious. Therefore, the power brokers just don’t approve MQM getting closer to Qadri.
The gravity of situation became event when President Asif Ali Zardari called an emergency meeting of PPP high ups, including prime minister at Karachi. The general expectation is that the ruling junta will try to create an environment where January 14 onslaught to Islamabad could be stopped. There is growing feeling that a massive movement against the current regime is being initiated and if all other means fail, sabotage activities will become more common. This can pave way for the dismissal of the present government by the President and putting in place an interim government.
In such a scenario the general elections may be deferred and an interim government, comprising of nominees of all the political parties will be installed. A question is also being discussed, in case an interim political set up is created, will President Asif Ali Zardari be able to retain his commanding position.
There are two opinions: 1) President Zardari meeting the fate like Farooq Leghari and Pervez Musharraf or 2) succeeding his commanding position. In either case the interim prime minister has to be a man of confidence of ‘power brokers’. However, the only apprehension is who will be elected the new president in case there is a search for an interim president also. One of the probabilities is that Chairman Senate will take over the charge as President but no one can really forecast the composition of interim set up.
Editorial published in The Financial Daily