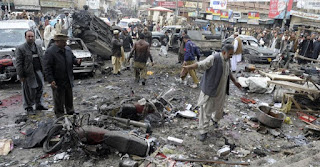 Thursday, January 10, 2013 will go as one of the deadliest days in the history of Pakistan when nearly 100 were killed in various blasts and 200 severely injured. The death toll is on the rise and so is the level of discomfort among the people.
The intensity of one of the blasts is evident from an AFP photo posted at the website of a local newspaper and included in this post, if anyone bothers to look at the details.
The efforts of conventional media must be recognized, especially because one of the reporters was killed in Quaetta attack and his colleague severely injured. The social media is debating and often some very pertinent observations/comments are posted.
While some analysts say that the government is losing its writ, Moonis Ahmar, an academician has raised a question, have things gone out of control or there is still time to prevent killing fields in a country which was created as a result of enormous sacrifices?
I am really impressed by one of the posts placed of Facebook that says, “If we have to save Pakistan we’ll have to look beyond sectarian divides, not be shias sunnis but muslims only! and at the same time condemn and speak against every single killing of an innocent person. Call it shia genocide, muslim genocide, human genocide but condemn and speak against it”.
This confirms the belief that there are certain extremist groups that take pride in killing.  Another post says,” I don’t know if this Sipah Sahaba, Ahle Sunnat Wal Jammat are an international conspiracy. Whatever it is, the reality is that they are open terrorists who not only kill innocent people but take pride in doing so”.
It is often said that law enforcing agencies initiate investigations on an incorrect pretext. This seems true if one looks at the media coverage of Swat incident. It is being stated that a gas cylinder blew up at a religious gathering that killed 22 people and wounded more than 80. However, people don’t rule out possibility of sabotage.
According to reports there were around 1,500 people listening to a Muslim cleric give a speech at the centre located at least 10 kilometres away from Mingora, the main town in Swat district. The area was once under the control of militants and had set up check posts before the army undertook an operation in 2009 to rid the area of Taliban-linked groups. Tableeghi Jamaat is a non political organization and attacks on its gatherings are very rare. These are considered lesser Muslims for their pacifist approach and their non-Jehadi approach.
Four explosions have been heard in the provincial capital Quetta, which in aggregate have killed around 100 people, including four police officials. Two explosions took place at Alamdar Road and two more explosions took place near Airport road. Earlier on in the day, 12 people were killed after a blast took place near Quetta’s Bacha Khan chowk.