Quetta witnessing sit in by Shias 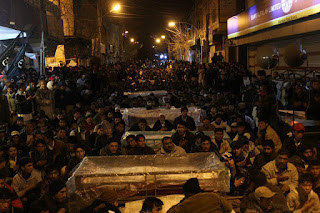 Armed with the unimaginable weapons and the dead bodies of their loved ones who were brutally killed in the Quetta blasts are staging a sit in Quetta, instead of rushing to bury them. It is the sign of the abnormality and desperation of one aspect of Pakistan’s current condition, that beleaguered brothers and sisters, fathers, mothers and children, are sitting out in the dark and cold Alamdar street of Quetta.
Veteran journalist Nasim Zehra in one of her posts on Facebook has written. “This protest, almost of an unnatural kind, will go down as one of the most heart-wrenching and poignant moment in Pakistan’s deeply traumatic journey towards stable and sane adulthood. The hopeful sign is the show of solidarity for the Shia Hazaras as people in Karachi and Lahore are planning protests”.
The protestors with dead bodies of their loved one are demanding that the killers be apprehended, Governor Rule be imposed in Baluchistan and the army takes over city’s security. Currently the CM and the Home Minister are both missing from Quetta while the provincial ministers appear to be in hiding”.
Quetta Yakjahti Council (QYC) has continued its protest since Friday evening against the worst terrorist attacks in Quetta, in which over 100 people lost their lives. According to media reports the sit-in includes women, children, senior citizens and the dead bodies of around 86 martyrs.
The QYC has declared that the sit-in will continue till the city is handed over to the army.
Shia leaders are now openly questioning Pakistani army chief General Ashfaq Kayani over security in the country after the recent bomb blasts in Quetta.
“I ask the army chief: What have you done with these extra three years you got (in office). What did you give us except more death,” Maulana Amin Shaheedi, a central leader of the Majlis-i-Wahdat-i-Muslimeen, told a news conference.
Most of Thursday’s deaths were caused by twin attacks aiming Hazara Shias in Quetta, where members of the sect have long accused the state of turning a blind eye to extremist militant death squads.
The burials were scheduled after Friday prayers but the leaders said the bodies would remain in place until Shias receive promises of protection. Shaheedi said “They will not be buried until the army comes into Quetta,” he said.
Violence against Pakistan’s Shia Muslims is rising and some communities are living in a state of siege, a human rights group said on Friday.
Last year was the bloodiest year for Shias in living memory as more than 400 were killed and if Thursday’s attack is any indication; it is just going to get worse.
According to media reports the banned extremist group Lashkar-e-Jangvi (LeJ) claimed responsibility for the attack in a predominantly Shia neighbourhood where the residents are ethnic Hazaras, a majority of whom are Shias who first migrated from Afghanistan in the nineteenth century.
The LeJ has stepped up attacks against Shias across the country but has zeroed in on members of the sect who live in resource-rich Balochistan province.
“The LeJ operates under one front or the other, and its activists go around openly shouting, ‘infidel, infidel, Shia infidel’ and ‘death to Shias’ in the streets of Quetta and outside our mosques,” said Syed Dawwod Agha, a top official with the Balochistan Shia Conference.
“We have become a community of grave diggers. We are so used to death now that we always have shrouds ready.”
The roughly half a million Hazara people in Quetta, who speak a Persian dialect, have distinct features and are an easy target. They are living in a state of siege.