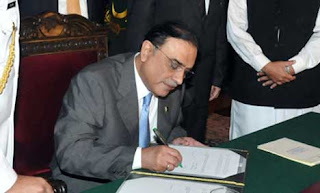 And finally President, Asif Ali Zardari has signed the summary regarding imposition of Governor’s rule in Balochistan that would make Governor, Zulfiqar Ali Magsi the chief executive of the province.
Earlier, Prime Minister Raja Pervaiz Ashraf had announced that Governor’s rule in Balochistan would be imposed for two months starting January 14, 2013.
Former minister Jan Ali Changezi, on behalf of Hazara community announced to end sit-in at 10.00am on Monday as President Asif Ali Zardari has signed the summary regarding imposition of Governor’s rule in Balochistan.
Hazara sit in Quetta had started in Quetta, provincial capital of Balochistan after Juma prayers. The protestors have already spent three nights in open as the temperature dropped to minus 10 degrees. While Chief Minister Aslam Raisani remained an absconder during this period, demonstrations engulfed the entire Pakistan.
It no longer remained a sit in by Hazaras or Shias as the entire civil society joined them, irrespective of cast and creed, including minorities. In many countries demonstrations were also staged in front of Pakistani missions. The chief minister didn’t show his face and was reportedly staying in UK. Raisani, a PPP member, is probably the most criticized and alleged corrupt politician in the country.
Imposition of Governor’s rule in Balochistan has been termed ‘too little too late’. One of the demands of the protestors was handing over control of Quetta city to Pakistan Army. For the reasons best know to the constitutional experts this has not been done. Governor,  Zulfiqar Ali Magsi has been appointed chief executive of the province. It is on record that earlier Magsi had expressed his ‘complete helplessness’ in resolving this issue.
It was feared that if control of Quetta was transferred to Pakistan Army, it would bring bad name to the civil and military bureaucracy. Many of the Baoch tribal chiefs who have taken asylum in other countries would start chanting slogans ‘usurp of rights of Balochs’.
This is the most disgusting argument because none came to condone with Hazaras, including leaders of mainstream political parties. President Asif Ali Zardari has confined himself to Biwal House in Karachi and prime minister and interior minister were bogged down by Qadri obsession. Strangely, Army Chief also preferred to keep quiet, except issuing a warning that the country faces serious internal threat.
One of the conspiracy theories is that some of the external forces are adamant at axing Balochistan from Pakistan. Over the years they have been hosting fugitive tribal chiefs and also pleading that an independent Balochistan should be created. It is often alleged that the much talked about Baloch insurgents are nothing but the ‘local operators’ of some foreign intelligence agencies, also getting funds and arms.
At the time of announcing imposition of Governor’s rule in Balochistan, Prime Minister Raja Pervez Ashraf had to say that he had taken other coalition partners into consideration over the issue. He specifically mentioned names of MQM chief Altaf Hussain, ANP chief Asfandyar Wali and PML-Q leader Chaudhary Shujaat Hussain, who had all urged him to impose governor rule in the province.
While Irman Khan reached Quetta to sympathize with Hazaras, Mian bothers neither came nor even bothered to send their nominees to Quetta. They also abstained from demanding removal of Raisani, may be because PML-N has lately emerged the biggest champion of the rights of Balochs.