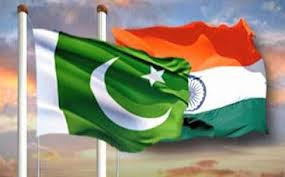 One often has to believe the conspiracy theories, though hate it the most. One such theory is that whenever it seems that the two countries are about to achieve a major breakthrough on the diplomatic front, suddenly tension starts developing on borders. Personnel of border forces from both the sides are killed and the entire efforts flop.

This has happened again lately when it looked almost certain that new visa policy will be introduced by India. There is also pressure on Pakistan to grant India MFN status but certain elements even don’t approve this.
Historically, India has been saying that extremist groups of Pakistan are the stumbling block, but ignoring the extremist groups present within. If Pakistani’s demand giving right of self determination to Kashmiris, the immediate response of Hindu extremists is, “We will not allow another division of Hindustan on the basis of religion.”
Neither of the sides knows nor even wishes to know how Kashmir issue could be resolved. A question arises; it is an issue being faced by the two neighbors or a geopolitical confrontation in which regional and global powers are involved?
If one looks at the history it becomes evident that the British Raj left a few thorns to ensure that animosity between India and Pakistan remains. They knew that these two countries (now three, India, Pakistan and Bangladesh) had the potential to become one of the strongest economic blocs of the world.
These countries put together enjoy enormous economic potential, offer a market comprising of millions of people and above all most dedicated workers. These three countries are part of SAARC and should have ideally signed free trade agreements, which also bodes well for smaller countries of the region.

Fallout of this ongoing animosity is that Pakistan and India have been spending billions of dollars annually on the procurement of conventional and non-conventional arms. Both the countries have attained the status of nuclear power and have been living in a state of war from the day they got independence from the colonial rule.
Experts are of the view that had the two countries spent this money on the welfare of their people, most probably these would have been the richest and most developed countries of the world. The reason for making subcontinent a colony was that it was called ‘golden sparrow’ even at that time.
Some of the western experts may not agree with the above assertion but this can be best understood by looking at the creation of Israel and encroachment of areas of neighboring Arab countries. Israel has grown only because of the support of United States and Bangladesh could have not been created without the active support of India and United States.
The story has not ended and the efforts have continued to further fragment the country into Greater Pakhtunistan, independent Balochistan and Sindhudesh as well as Jinnahpur.
Historically, Pakistan has been providing transit trade facility to landlocked Afghanistan. Pakistan’s importance was realized when the United States decided to help Afghanistan in averting USSR attack. Pakistan’s importance has been further highlighted over the last ten-years due to ongoing war on terror in Afghanistan.
To undermine Pakistan’s importance India has been fully supported by the United States to construct Chabahar port in Iran and also rail and road link up to Central Asia passing through Afghanistan.
Not only Pakistan but some of the other SAARC member countries feel that Indian high headedness has not allowed functioning of this forum as planned. The common complaint is that India wants to take advantage of its enormous size and keep all other countries, including Pakistan its periphery.
At times it is realized that India wants to create its hegemony in the region. In this endeavor, India is fully supported by the United States.
There is a growing realization that the United States considers Pakistan ‘mercenary’ and India a business partner. India has been rewarded with nuclear technology for not joining Iran-Pakistan-India gas pipeline but Pakistan was not being treated at par.
A lot of the US companies have outsourced their business to Indian enterprises but Pakistan remains a victim of ‘travel advise’ issued by Washington. While Pakistan’s demand of ‘trade not aid’ has not been accepted, disbursements under coalition support funds have been delayed on one or the other pretext.
A question arises; is all this humbug there to undermine Pakistan’s importance or to create Indian hegemony in the region? While it is the easiest for the United States and India to undermine Pakistan’s importance, it may not be wrong to say Pakistan’s faulty foreign policy has often annoyed other major super powers, particularly USSR of the past and Russia of today.
At times even Pakistan’s time test friend China is unable to understand some of the decisions made in Islamabad. Foreign policy gurus often say that being a periphery to United States has caused enormous losses to Pakistan.
One can recall Army chief had lately said Pakistan faces enormous internal threats but many failed to understand the threat. However, it became evident lately when the country was witnessing political volatility, India resorted to unprovoked firing and its Army chief threatened to unilaterally initiate attack Pakistan blaming it of cross border terrorism.
Intellectuals from both the sides have been involved in confidence building measures but process is derailed on one of the other pretext. The new visa policy has been invoked on the pretext that Pakistan was involved in killing of Indian border forces, Pakistan also raises similar allegation against Indian troops.
The recent Indian aggression had refreshed the memories of fall of Dakha  when India supported the rebel groups and the fight ended at the surrender of more than 90 Pakistani soldiers and officers. Fears are being expressed that United States and India are supporting Baloch insurgent groups.
Though, India has been denying its involvement the question remains, who is proving arms and funds to Baloch insurgents?