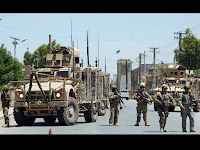 For more than four decades people of Pakistan have been living in the conditions that can be termed worse than war. In war there is clear differentiation between friend and foe, rules of combat are decided and those violating the rules can face trial for committing war crimes. However, in this part of world various proxy wars are being fought, where funds and arms are being supplied by those who have vested interest.
If one country is keen in possessing Pakistan’s atomic installations, other is keen in occupying its coastline. If a country is keen in taking over control of mineral resources some others are adamant at fragmenting the country to create ‘landlocked’ countries to keep those permanently dependent on them and keep on fighting proxy wars for them.
Though, many critics are still shy to accept that whatever is happening around the globe is aimed at getting control on resources from fossil oil to other natural resources and from water to right to collect booty on the movement of goods. These were the reason super powers developed colonies around the world and are still doing the same, may be in a slightly refined manner but are as brutal as they were centuries ago.
They have no regard for human life whatsoever and those who claim to be the champions of human rights are the worst. Pakistan is not alone similar stories are also going on in Arabian Peninsula, Africa, South Asia, Central Asia etc. Pakistan remains in lime light because it is rich in food, fossil oil and minerals and above all ‘the oldest trade corridor’. Movement of energy products has further highlighted its importance.
On one side are oil and gas rich Arabian Peninsula and North Africa and on the other side are energy starved India, China, Bangladesh, Japan, Korea and Taiwan. Super powers have created funds which drive prices of fossil oil and gas. As booty collectors they demand money for the safe and speedy movement of energy products. To maintain their complete control, they install and topple governments in countries that try to defy the rules. Monarchs are often hostage and this could be best understood if one looks at Saudi Arabia.
The country is the biggest producer and exporter of fossil oil. It is the biggest beneficiary of high oil price but it is only one side of the story. Every year it is buying arms worth billions of dollars, last year it had procured arms worth US$35 billion, so whatever it earned from sale of oil went to the pockets arms sellers, United States is the biggest seller of arms in the world.
Saudis are made to believe that Iran is a bigger threat as compared to Israel. This on one hand allows United States to get support to impose more stringent sanction on Iran and on the other hand keep is away from selling its oil. Iran is among the top three largest oil producing country of the world. In this endeavor UAE and Qatar have also joined the US bandwagon.
Many were reluctant to accept that United States supplies funds and arms to rebel groups but it is no longer a secret. Killing of US Ambassador in Benghazi allowed the critics to say that he was not a diplomat but spy, though much earlier the Pandora’s Box was opened in case of Raymond Davis.
It is on record that the United States keep opening one front after another to keep its arsenal factories running. Its immediate buyer are ‘power hungry politicians’ who start with ‘violation of human rights’ then demand change in regime and the dance of death continues around the globe.