Remember killers has no religion 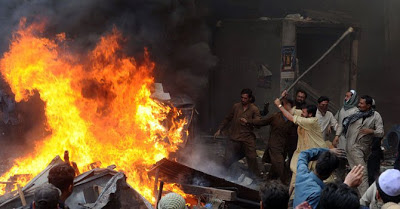 Pakistanis strongly believe that the ‘imported militants’ who claim to be the true Muslims are the worst enemies of Muslims and the agents of enemies of Islam. They are adamant at killing people to plunge the country into anarchy and ultimately into the civil war. Their sole objective is to kill people.
Over the years they have been killing Shias and Sunnis to create an impression of sectarian rift, which no Pakistani is willing to accept. They have also tried linguistic divide. They collect booty and indulge in kidnapping for ransom only to collect money to buy arms. They also get funds and arms from outside.
This evening I had gone to a family friend’s house for the condolence of his grandfather.
When I reached home two news reports virtually shattered my nerves, first a blast at a mosque in Peshawar and second burning of houses of Christians in Lahore. News reporters may give these killings and burnings any angle but it is brutal and media must say in loud and clear words that killers are not Muslims and must be punished.
According to initial report in the explosion inside a mosque in Peshawar at least five people have been killed and 29 others injured. The blast took place inside the mosque and the device was planted near the front row of the congregation and people were getting ready to pray when the blast occurred.
Peshawar, the capital of Khyber Pakhtunkhwa province, has been the site of several terrorist attacks in recent months. The city is surrounded by tribal regions where Al Qaeda and Pakistani Taliban militants are said to have hideouts.
In another incident an enraged mob torched dozens of houses located in a Christian-dominated neighborhood of Lahore. Fearing for their safety, hundreds of Christian families have fled the area.
The mob attacked the houses in Lahore, Punjab’s capital following allegations of blasphemy against a Christian man. It appeared that the man had been falsely accused of blasphemy but the police was forced to register a case to placate the mob, a local police official said.
Speaking to a private television channel, Punjab Law Minister Rana Sanaullah said the accused was in police custody. Sanaullah said all those involved in the arson would be arrested, adding that his government would try to rehabilitate the affected Christian families.
Rana Sanaullah is not alone, president, prime minister, chief ministers, governors and even political leaders issue such stereo type statements, and no culprit is arrested or punished. All are acquitted by honorable courts because of lack of evidence.