Iranian clergymen protest
against massacres of Shias in Pakistan 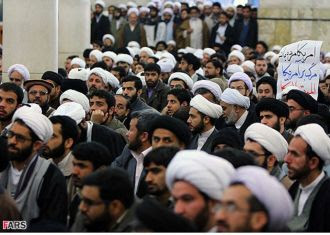 On Saturday, a large number of Iranian clerics and seminary teachers and students staged a demonstration in Tehran to condemn the recent bloody massacres of Shias in Pakistan.
Violence against Shia Muslims has escalated in various parts of Pakistan over the past few months. Since the beginning of 2012, hundreds of Shias have been killed in the country.
In the latest terrorist bombing targeting Shias, a suicide bomber attacked Shia Muslims as they were leaving a mosque in the Pakistani city of Karachi on March 3, killing at least 45 people.
The Iranian clerics called on the relevant international organizations to take the measures necessary to end violence against Shia Muslims in Pakistan.
The demonstrators chanted slogans “Rise up Muslims; Pakistan is in flames,” “Any Muslim’s silence is betrayal of the Quran,” “Down with Israel,” and “Down with the United States.”
State Inspectorate Organization Director Mostafa Pourmohammadi delivered a speech at the demonstration in which he said, “Today, in Pakistan and other countries, women and children who are mourning and saying prayers are attacked.
Bombing attacks occur in Iraq and war rages in Syria… They also attack us, carry out assassination, and make threats to force us to back down and stop… (But) today, thanks to the Islamic Republic of Iran, Islam is going up the ladder of growth and progress, and the situation is in our favor.”