US must accept its defeat in Syria 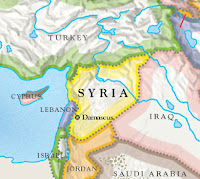 Some of the readers may find this particular blog a little different from those I have posted since June last year, around (80) eighty so far. As you can gather from my profile and other posts available on Google I am an economic analyst, who mostly covers Pakistan’s economy. This pushed me first to political economy then to geopolitics in the region and now to most horrendous imperialism of super powers.
The bottom line is that super powers create their hegemony by lodging and dislodging governments in countries which they consider important for enhancing their economic superiority, controlling energy and other mineral resources and above all creating conflicts so that their armament factories can operate over time.
They have been abusing the word democracy the most, because most of their ‘obedient servants’ are dictators; even though some of them claim to be elected representatives. These rulers can be termed ‘viceroys’ of the colonial era because of being subservient to external powers rather than looking after the interest of their own people.
Going through previous blogs one can also understand my point of view that United States has been fighting a proxy war in Syria. Rebels are improvised type of CIA agents and touts getting funds and arms from the United States. This fact also becomes evident when one reads US newspapers and listens to television networks.
The ongoing suggestions from elected US representatives, who own or have substantial stake in energy trade and armaments manufacturing, are the worst warmongers. They have sold the largest quantity of arms to Saudi Arabia and many other countries which even don’t have regular army or any face threat from any country.
Warmongers have completely brainwashed Saudis who now consider Iran a bigger threat as compared to Israel. The situation has not changed a bit from signing of Camp David agreement, which led to assassination of Egyptian President Anwar Sadat. However, some fears aroused when it was proved that Israeli army is no more invincible. That brought the change in US foreign policy and various uprisings were initiated in Arabian Peninsula, Middle East and North Africa, all aimed at installing new viceroys.
Some of these may have yielded favorable results for the United States but many led to anti-US groups becoming the rulers. This led to second wave of toppling and installing in which Syria remains the biggest thorn, not because of its military might but because it is believed to be the first defence wall of Iran. In other words for demolish Iran, fragmentation of Syria is a must as all the attempts to create any uprising in Iran have failed.
And finally the cat has come out of the bag with the initiation of discussion regarding direct US air assault on Syria, this time once again the reason is ‘possible use of chemical weapons’. One can still recall that the prime reason for attack on Iraq was also ‘presence of weapons of mass destruction and allegations of use of chemicals weapons by Saddam Hussan, both of these allegation proved hoax calls.
Billions of dollars of tax payers have been used in these aimless wars and if one also adds Afghan, the amount runs into trillions of dollars. Despite spending this enormous amount, killing of hundreds and thousands of innocent men, women and children, sabotages are taking place everywhere in the world.
I am also concerned because of the hostilities growing in Pakistan’s neighborhood. Iran has been enduring economic sanction for more than three decades, war is being fought in Afghanistan for more than four decades and Pakistan and India are living in a constant state of war since independence.
Over the years India and Pakistan have spent trillions of dollars on accumulation of conventional, non-conventional arms and even atomic capabilities. It is true they can wipe out each other in seconds but what will they achieve? May be a huge piece of baron land and millions of crippled people but this is not the way of life. They should join hands and work for the prosperity of their people and if India has to grant independent status to Kashmir, it is worth doing as compared to accumulating arms.
Now I address my readers from United States directly and ask a question. Your country is the oldest democracy of the world. I strongly believe that you spend a lot on welfare of humanity and my mentor is Bill Gates. Have you ever asked your elected representatives why they are spending tax payers’ money on war rather than spending it on the welfare of US citizens?
Aren’t there any poor in the US? Is every US citizen one as rich as Cheney, Bush, Obama and other legislative members who are suggesting direct attack on Syria, because it is a threat for the US and the world?
Remember, no one is threat for the world except the war mongers. Please act before the world plunges into the third world war.