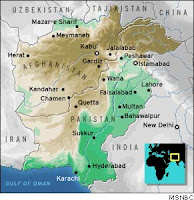 With the withdrawal of Nato forces from Afghanistan fears of another civil war in the country are being expressed. Ironically Hamid Karzai was installed and supported by the United Sates but now a scenario is being painted of growing distance between the two partners.
Has heart and mind of Karzai changed or he is trying to create an illusion that he is the best friend of Afghans?
One should never forget that Karzai’s rule is only because of the US support; else he rules only a small part of country. Some cynics even go to that extent of saying that he is President of Kabul not of Afghanistan.
One of the questions often asked is, can an Afghan think like a normal person? Most regrettably the reply is in negative because the country is persistently in the state of war for more than four decades.
Those born and brought up under the prevailing situation think about killing the enemy before he kills them. The level of mistrust is very high because of presence of double agents, working simultaneously for Taliban as well as Nato.
Since other sources of income have virtually vanished due to the horrendous war, loyalties can be purchased with money.
It is not a secret that Afghanistan has once again emerged as one of the largest producer of poppy; hundreds of labs are also operating in the country. For the safe transfer of drugs millions of dollars are paid as transit free to clan chiefs.
The rule is simple either you join the party or be prepared to die because the business has to continue as usual. Previously it was said that power corrupts people but the new term is you can corrupt anyone and everyone by paying money.
It is also on record that soldiers belonging to certain countries are hardly attacked because they take good care of people living in the area. They have help in building schools and hospitals, improving logistics and even generating electricity.
A question remains, why do Afghans hate Nato soldiers in general and US troops in particular?
The reply is simple ‘they consider Nato soldiers occupiers’ and also believe that the entire drama has been staged to get control over their resources.
Everyone knows that Afghanistan is reach in fossil oil, gas, minerals and above all precious metals. Afghans also believe that instead of creating job opportunities for people everyone is made to fight for his survival, just by killing others.
No doubt Afghans are simple Muslims and don’t like what the Americans have been trying to teach them. They have their own norms and anyone trying to violate these is disliked. The situation often gets real nasty because they are told to do certain things which their society doesn’t approve.
In fact various groups have been created and are being supported by the neighboring countries. Oldest and the most amicable relationships have been between Afghanistan and Pakistan and Afghanistan and Iran.
People living in these three countries have been moving freely and conducting trade. One could still recall the days when Pak rupee was used as second currency in Afghanistan.
However, lately Indians are also trying to prove that they are friends of Afghans but also using them against Pakistan, the way United States has used Afghans against Iran.
In this race some of the Central Asian countries have also joined, especially using Afghans living in Northern areas against Pakistan and Iran.
Therefore, establishing peace in Afghanistan will not be possible unless all these stakeholders join hands and also learn to differentiate between friends and foes.
Being a landlocked country Afghans has to come at terms with Pakistan rather than towing the Indian agenda of establishing its hegemony in the region.