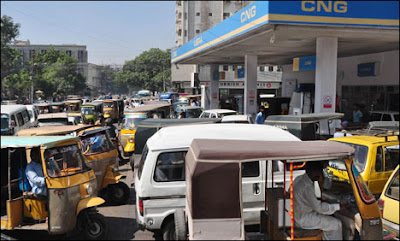 On Tuesday Karachi witnessed the worst traffic jam in early hours of the day, when most of CNG stations did open. Motorists got real jittery because SSGC also announced suspension of gas supply to CNG for 48 hours starting Wednesday 9.00am.
Rangers were called to disperse those vehicles which were causing disruption in traffic flow. Strangely, no effort was made to open up those stations defying selling CNG at the price fixed by the Supreme Court of Pakistan, that tantamount to contempt of court. The negotiations regarding new price formula of CNG could not be determined as talks between the Oil and Gas Regulatory Authority (OGRA) and CNG Dealers Association once again failed on Monday.
Consumers have been enduring closure of CNG station throughout Pakistan under ‘Gad load Management Program’. While Government of Pakistan attributes this to shortage of gas experts call it ‘gross mismanagement’. However, after reduction in price ordered by the Supreme Court of Pakistan the situation turned real nasty for consumers, worst hit is the general public because most of the public transport remained off road.
Consumers go to the extent of saying that gas marketing companies are conniving with the owners of CNG stations as they have not disconnected gas of stations defying court order. They also demand that the issue needs immediate resolution to save millions of people from ‘man made crises. A lady driver of a school van said, “We are not benefitting from reduction in CNG price as now we have to use motor gasoline, which is very expensive. If the government wants to discourage use of CNG it must offer a cheap alternative fuel.”
Another driver who hails from Swat said, “The war on terror has turned hundreds and thousands of people living in northern areas internally displaced persons. I came to Karachi to earn for my family but being denied the right. Running public transport on diesel is almost impossible due to its sky rocketing rice.”
Thanks the situation didn’t turn nasty on Tuesday but public can turn violent if CNG stations remain close indefinitely. No rocket science is required to find out cost of CNG and operating expenses of stations. Public is forced to conclude that some of the quarters want the crisis to prevail so that they could achieve their vested interest.