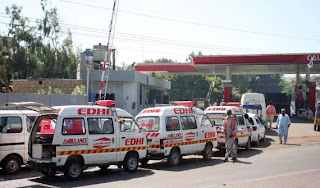 The way owners of public and private vehicles have been tortured lately, demands the most stringent action against owners of CNG stations, many of them refusing outright to sell CNG and others following ‘go slow tactic’. Their act tantamount to contempt of court, which demands immediate arrest of owners of CNG stations, cancellation of their permission and disconnection of gas supply. The apex court had decided to curtail price and in all sincerity have valid reasons to slash the price. Now it is the responsibility of owners of CNG stations to prove they are incurring losses, but do they have to any argument to refute that they had minted tons of money in the past?
At times one tends to believe that SSGC and SNGPL have also joined hands with the owners of CNG stations. Decision to keep CNG stations closed for 48 hours at a stretch force a person to infer that SSGC is supporting the owners. The other point is that SSGC has not disconnected supply of those stations, which have chosen to remain closed despite court orders.  It may also be said that closing of CNG stations ‘due to technical reasons’ is also the mantra of gas marketing companies.
If one looks at the role of Oil and Gas Development Authority (Ogra), one point has been clear that it has been protecting the interest of Government of Pakistan (GoP), gas marketing companies and owners of CNG stations. This was in gross violation of the mandate for which it was created, looking after the interest of consumers.  It hardly has any argument to refute that most of the permissions to set up CNG stations have been issued in blatant disregard to the policy. The most obvious violation is that there should have been a distance of three kilometers between two stations.
A little probe also shows that both SSGC and SNGPL have been used to achieve political mileage. Not only domestic connections were granted indiscriminately but all sorts of violations were committed in granting connections to CNG stations owned by politicians belonging to all the political parties including PML-N. These stations are also accused of pilfering the highest quantity of gas from SNGPL network, estimated around 300mmcfd.
While it is true that during winter gas consumption increases but this time it is fears that gas supply to CNG stations is denied for ensuring higher supply for power plants and fertilizer manufacturing units. It has been highlighted that burning gas in power plant, is its worst use because of availability of alternative fuel. The point that electricity generation by burning furnace oil costs more is also the lamest excuse because worst has been the performance of distribution companies. Payment for 30% of the total units dispatched is received and remaining goes to theft and bad debt.
The apex court is requested to please complete the hearing at the earliest and give its final verdict. However, the court is requested to: 1) allow only a modest increase in CNG price, 2) instruct the government to come up with an alternative fuel that is chap and 3) instruct the government to ensure sale of E-10 (motor gasoline containing 10 per cent ethanol). The beauty of E-10 is it does not require installation any additional gadgetry.
Courtesy: The Financial Daily