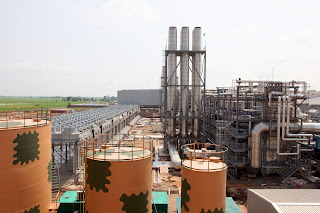 The Hub Power Company (HUBCO) was incorporated in Pakistan in August 1991. The principal activities of the company are to develop, own, operate and maintain power stations. The Company owns an oil-fired power station of 1200MW (net) in Balochistan (Hub Plant) and a 214MW (net) oil-fired power station in Punjab (Narowal Plant). The company also has a 75% controlling interest in Laraib Energy, a subsidiary company which owns an under construction hydel power project of 84MW.
BMA Capital, Pakistan’s leading brokerage house has revised TP of HUBCO upwards after taking into consideration 1) increasing revenues from Narowal Power Plant (NPP) and 2) better dividend outlook going forward.
HUBCO like the entire energy chain is stuck up with the ever mounting circular debt issue which has also impacted the NPP payments and can affect the company’s payout capacity, if no resolution comes through.
During 1QFY13 profit increase by 70% YoY as load factor improved, with a phenomenal 70% increase in profits to Rs2,114 million (EPS: Rs1.83) from Rs1,241 million (EPS: Rs1.07) in FY12, HUBCO commenced its financial year on a positive note. The topline of the company also grew by 19% on YoY basis to Rs48,316 million during this period.
According to the brokerage house, the prime reasons for augmented profitability are 1) revenue stream from NPP, 2) improved load factor of 85% in FY13 as compared to 75% in 1QFY12 and 3) continued depreciation of Pak Rupee against US Dollar.
Recent news story highlighting the management’s concerns over non-payment of dues has raised many eyebrows on the company’s capacity to payout this year. However, the brokerage house keeps its assumptions intact and expect the company to pay Rs6.5/share as dividends believing FY13 being the election year is expected to urge government to release funds and resultantly curb power outages.
Laraib Power project, the second expansion project in line after Narowal is expected to come online sooner than scheduled (mid CY13), according to sources.
Brokerage house believes this to augur well for the company once the project starts its operations. However, it has not incorporated the earnings from Laraib in its financial models awaiting COD and finalization of tariff.
HUBCO remains a favorite pick in the electricity sector as the payouts have remained robust despite augmenting levels of circular debt and profitability hedged against Rupee devaluation.