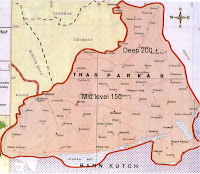 It was in 1992 that the Geological Survey of Pakistan discovered huge deposits of coal – the second largest in the world – in Tharparkar District, Sindh. Thar coal field is estimated to have reserves of 175 billion tons, 68 times higher than Pakistan’s total gas reserves.
Thar coal has been declared lignite type, spreads nearly 10,600 square kilometers, with power generation potential of 100,000 MW consuming 536 million tons a year. Experts often say that development of the Thar Coal is the only viable long-term solution for meeting energy demands of the country.
Since price of crude oil is likely to hover around US$100/barrel, the only way out for energy starved Pakistan is to convert the existing power generation units from furnace oil to coal. On a fast track basis — in three to five years — Pakistan’s entire power generation of steam-based power plants can be switched over to coal, saving the country over $10 billion annually at current oil prices.
A visionary approach can wipe out Pakistan’s entire debt in 10 years. However, if we do not move fast, a $200 a barrel of oil price will bankrupt Pakistan and huge civil unrest will prevail. The CWS technology has reached a level where a plasma gasifier can convert the coal to high BTU brown gas for use in gas turbines and soon in large stationary engines.
Pakistan’s leading scientist, Dr Mubarakmand has said that coal reserves are also available in powder form under water and Pakistan could produce 50,000 megawatt electricity and 100 million barrel diesel just through the gasification of these reserves.
Large reserves of coal in Thar can help generate energy to save billions of dollars spent on import of oil. Thar Coal Project which has the potential to change the energy landscape of Pakistan continues to move slowly, thanks to country’s economic managers.There is a perception vested interests are out to ensure it does not happen.
One of the problems is that Thar Coal project needs investment of billions of dollars for infrastructure and development of the field, and the government instead of relying on local talent and funds wants to give contract to aliens giving overriding consideration to personal over national interest.
They say Pakistan is endowed with enormous natural resources and minerals, if explored and utilized properly; the country can become a self-reliant country and get rid of dependency syndrome. Weak economy, technical resource constraints coupled with flawed decisions of the inept governments have brought the country to the present dismal position.
Given the prohibitive cost of fossil oil, meeting energy needs has become a challenge for both developed and developing countries; and to keep the wheels of industry going every country is obliged to keep this subject on the top of its agenda.
Pakistan is endowed with enormous reserves of coal in Thar, Lakhra and other places, but no serious effort has been made to exploit these coal reserves and establish the coal-fired power plants. It is true there are financial constraints and international pressures on installation of nuclear reactors and generation of electricity. The government should expedite the development of Thar Coal project, which involves much less investment as compared with large reserves.
Dr Mubarakmand assured that the difficulties in the way of the utilization of Thar coal would be removed to accomplish the task within stipulated time. The project “Creation of New Processing Facilities for handling and purification of Coal Gas (HPCG) produced by underground coal gasification” was approved in the CDWP meeting held on April 30, 2009. The aim of the project was to create new processing facility for handling and purification of coal gas by underground coal gasification in Tharparkar.
While Dr Mubarakmand insist on coal gasification rather than any other type of mining or establishing mine-mouth power plants various controversies have brewed up on the use of Thar coal as a fuel for Pakistan’s power generation needs instead of furnace oil and natural gas.
Coal has the following basic values for consideration: volatile matter, which is the igniter for the fixed carbon in the coal, the ash content, the sulphur content and, lastly, the water content. Experts say that water within the coal would soon evaporate in the hot season at Thar and turn the coal to powder and dust. The volatile matter will evaporate as well and reduce the thermal value by at least 10 per cent.
Assuming, the coal reaches the power plant, about two million gallons a day of fresh sweet water will be needed to keep it cool for seven-day storage of a 300MW plant. Considering all facts, the only solution is to convert the coal to coal water slurry — a process now perfected by Zheijang University in China and in use in over 100 locations — at the mine and transport the slurry to Sindh’s and Punjab’s existing and new power plants by pipeline, thus saving road from transporting the fuel.
A report has been published in local media that certain quarters are working on selling Thar coal to India. While no one can overlook this probability, experts say Thar coal seams extent into India and if it wants to exploit it there is no need to negotiate with Pakistan. As such coal produced in India is of much superior quality and the country has coal-based power plants.
One has to believe in the rumors that oil lobby is deadly against using coal for power generation. The critics often say that people related with oil import make billions of dollars. These statements get some credibility if one looks at short shipments and procurement from specific suppliers.
It also on record that every year a huge quantity of oil is pilfered from oil installation area in Shireen Jinnah Colony in Karachi, provincial capital and port city of Sindh and pipelines connecting Karachi port with Mahmoodkot oil storage facilities located near Lahore, provincial capital of Punjab.