Pakistan: OGDC profit up 9 per cent 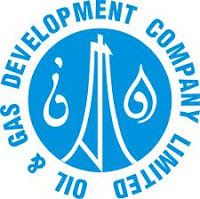 Pakistan’s largest oil and gas exploration entity, Oil and Gas Development Company (OGDC) has posted profit after tax of Rs75.7 billion (EPS: Rs17.59) for 3QFY13 (July2012-March2013) period as compared to Rs69.2 billion (EPS: Rs16.10) for 3QFY12 (July2011-March2012), this depicts a decent earnings growth of 9% YoY.
For 3QFY13 (January-March 2013), the company has posted a nominal decline of 4% YoY in profit to Rs26.4 billion (EPS: Rs6.15) owing to higher exploration expenditure.
The result announcement was also accompanied by an interim dividend of Rs1.75 per share cumulating the 9MFY13 payout to Rs5.50 per share.
The result was below analysts’ expectations on account of phenomenal surge in exploration expenditures to Rs8.95 billion due to increased number of dry well write-offs and higher exploration activity in 9MFY13.
It is believed that a total of 6 wells were written-off during the period including a sizeable write-off in March this year.
Notable improvement in oil and gas production and higher other income remained the prime factors behind earnings growth for 9MFY13. However, phenomenal increase in exploration expenditure marred the growth in bottomline.
Net sales of the Company surged by 19% YoY to Rs169 billion for 9MFY13 due to: 1) robust oil & gas production (estimated to increase by 7% and 4% YoY respectively) , 2) higher wellhead prices of major fields (estimated to be up by 4% to 8% YoY on average)  and 3) a 9% YoY depreciation in average Pak Rupee value.
Other income of the Company clocked in at Rs10.8 billion (up by 58% YoY) in 9MFY13 on account of interest income recorded on TFC investments (subscribed in Sep12).