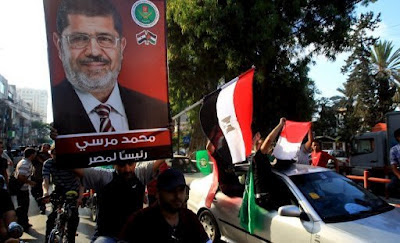 Egypt in the lap of Muslim Brotherhood

While the United Sates seem adamant at maintaining its hegemony as it is often termed the sole surviving super power. Its focus remains oil producing countries, the most obvious being Saudi Arabia, Yemen, Iraq, Iran, Libya, Syria, Egypt and many more.

The recent uprising in the Middle East and North Africa (MENA) was funded and even arms were supplied by the United States. Other ongoing conflicts are mostly related to Israel with Hamas, Lebanon and Turkey. Memories of attack on Turkish flotilla and killing of Hamas top notches in UAE still haunt.

Failure to tame Iran after more than three decades of economic sanctions is making both the United States and Israel desperate as well as jittery. Many failed attempts to intimidate Iran have led to even stringer sanctions. Israel’s threat that it reserves the right to attack Iran irrespective of the outcome of 5+1 negotiations upsets countries located in close vicinity.

If Iran was a headache the outcome of election in Egypt has prompted The United States and Israel to render the newly elected president ‘feeble’ by retaining power with the general who have been running the country. Winning of majority votes by Muslim Brotherhood candidate Mohamed Morsi has suddenly shifted focus to Egypt and away from Iran. Hosni Mubarak outset was driven by decades old saying, ‘Eliminate the agent when he becomes redundant’. He was removed after three decades to install another obedient partner, who could also keep Israel happy.

UK Foreign Secretary William Hague also congratulated Morsi, saying it marked “An historic moment for Egypt”. A White House statement said: “We believe it is essential for the Egyptian government to continue to fulfil Egypt’s role as a pillar of regional peace, security and stability. Israeli Prime Minister Benjamin Netanyahu said he hoped the long-standing peace treaty between the two countries would continue.

The other reports says The Islamists’ rise to power in Egypt will send shockwaves through the courts and palaces of conservative Arab kings and presidents who have tried for decades to put the lid on political Islam. But foremost among Egypt’s neighbors who watched the brotherhood’s success with increasing alarm is Israel. It was the first Arab state to sign a peace treaty with Israel and the brotherhood has traditionally been vehemently opposed to that.

According to another report, it also remains uncertain whether the low-key, little-known Morsi can serve as a unifying figure in a nation that has splintered politically since the revolution, with many Egyptians fearful that Islamic leadership will impose strict moral codes or try to dominate politics. His victory will serve as an inspiration for Islamist movements across the region; it is likely to be seen as a potential threat for Israel, which has regarded Egypt as a linchpin of Middle East peace through their 35-year-old treaty.

According to Dr Boris Dolgov, a leading expert at the Institute of Oriental Studies of the Russian Academy of Sciences, “Egypt is split down the middle”. Half of its people, mostly the more conservative and less educated folk living in underdeveloped outlying provinces, side with the Islamist principles of Mohamed Morsi. The other half, which mostly consists of educated city dwellers, supports the secularist principles of Ahmed Shafiq, the last prime minister under Hosni Mubarak.

Dolgov has also warned that jubilation of Morsi’s followers can be short-lived. He said “Indeed, the governing Military Council has already curtailed the powers of the President by assuming sweeping powers over fiscal matters and lawmaking. The military will be the ruler, not Morsi. As soon as his supporters realize this, they will start protesting against the governing Generals.”