Pakistan Succumbing to US Pressure 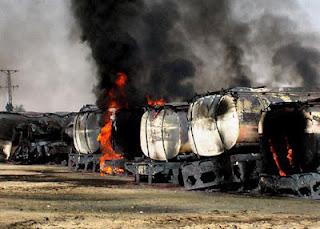 And finally Pakistan has opened Nato supply route, without demanding any transit fee on simple sorry by Hillary Clinton, US Secretary of State.
In return Pakistan is likely to get US$1.1 billion due under Coalition Support Fund, which has been subject of wrangling between the two countries.
Pakistan’s claims often rejected and smaller sums approved by Washington for reimbursement. It is not a favor because the amount had been approved and already gone through the process and pertains to services rendered before closure of the supply route.
The announcement coming from the two governments suggest that the suspension of Nato supplies was not in the interest of Pakistan, which seem incorrect. In fact Nato had to incur almost three times the expense in using alternate routes. On top of all opening of route was necessary for withdrawal of troops from Afghanistan, expected to commence in 2014.
Most offending is one of the editorials published in The New York Times alleging that the military of the ‘crippled and chaotic’ state continues to play a double game of accepting aid from America while enabling the Afghan Taliban. It also said that Pakistan’s political system is growing ‘ever more dysfunctional’.
Pakistanis fail to understand because on one hand says the US administration says it needs Pakistan’s help in reopening a critical supply route to Afghanistan and in urging the Taliban to engage in peace talks so that combat troops can be withdrawn from Afghanistan by the end of 2014 and on the other hand Defense Secretary Leon Panetta says “reaching the limits of our patience.”
According to the editorial the US President, Barak Obama declined to hold an official meeting with President of Pakistan, Asif Zardari at the NATO summit meeting in Chicago in May. It also said The United States has little choice but to continue drone attacks on militants in Pakistan. It has urged India to become more involved in Afghanistan. Surprising was the phrase ‘Pakistan is paranoid about India’, which it sees as a mortal adversary.
Equally disturbing for Pakistan and United States should be the threats from Pakistani Taliban to attack Nato supply trucks and kill its drivers if they tried to resume supplies to troops in Afghanistan. Prior to the closure they have carried out dozens of attacks; disrupting supplies destined for Afghanistan, and have repeatedly warned of more if Pakistan reopened supply route.
Opening up of Nato route is likely to get fierce response from religious groups and politicians who have been demanding Pakistan should pull itself out of proxy US war in Afghanistan. Opponents of the present regime enjoy street power and if these demonstrations turn violent containing these would be difficult.