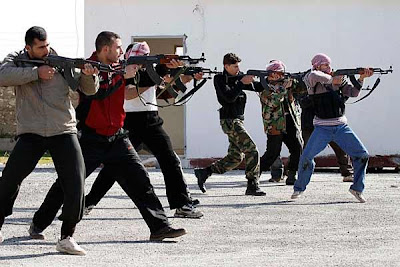 According to an editorial published in Pakistan’s The Financial Daily, “Reports about Syria by the Western media were often said to be tinted but little was there to refute. One of the allegations is that they are not reporting what’s happening in Syria correctly because at times propaganda prevails over truth and disclosures are incomplete.”

It has also pointed, “Syrians are struggling to prevent Western conquest, exploitation, and control. They’re fighting for their lives to stay free. Followers of this policy say the issue isn’t whether Assad’s government enjoy public support or not but its sovereign independence has made it vulnerable.”
Even bigger accusations have been leveled by the Syrian authorities. They have accused regional powerhouses Saudi Arabia, Qatar and Turkey of trying to destroy the country and vowed Sunday that they would defeat rebels who have captured large swathes of the commercial hub Aleppo.
Syrian Foreign Minister Walid al-Moallem, on a visit to Iran, leveled some rare public criticism of Sunni powers in the Middle East, saying Qatar, Saudi Arabia and Turkey are supporting a plot hatched by Israel to destroy Syria. “Israel is the mastermind of all in this crisis,” Moallem told a joint news conference in Tehran with his Iranian counterpart Ali Akbar Salehi.
Syrian opposition had appealed on Sunday its foreign allies to provide with heavy weapons to fight President Bashar al-Assad’s killing machine and said it would soon start talks on forming a transitional government to replace him.
“The rebels are fighting with primitive weapons. We want weapons that we can stop tanks and planes with. This is what we want,” Abdelbasset Sida, head of the Syrian National Council (SNC) opposition alliance, told a news conference.
However, criticism about the SNC’s legitimacy is likely to complicate its efforts to form a transitional government. It backs the Free Syrian Army rebel force, despite having not always overtly supported it in the past.
Last week, Brigadier General Manaf Tlas, one of the highest ranking defectors to flee Syria, said he would try to help unite Syria’s fragmented opposition inside and outside the country in order to agree a roadmap for a power transfer.
Reportedly al Queada has joined and supporting the rebels. A question is being raised is this the same as the US supporting the Taliban when USSR attacked Afghanistan but turning hostile once the motive was achieved.
Observers say Syria was calm and peaceful until Washington imposed violence, mass killing and destruction. They say Syrian conflict isn’t an uprising, revolution or civil war but Western media orchestrated by Washington is distorting the reality.
The Financial Daily has rightly concluded, “Insurgents are fully supported by Washington proxies. Subjugating is termed liberating the oppressed. In fact they are aiming at assault if other methods fail. Opponents of Assad are being provided funds and arsenal to initiate a full scale war. This is exactly what they did in Libya.”