Arabs Falling in Deadly US Trap 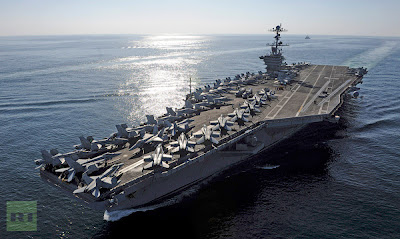 The United States is killing two birds with one stone. It is keeping crude oil prices high in the global market but taking bulk of the income of oil rich Arab countries back by creating Iran phantom and luring them to buy lethal arsenal. Those who are familiar with hoax call of Weapons of Mass Destruction in Iraq say the story of Iran-Syria alliance is the name of new strategy.

The EIA Inspectors have failed in providing any credible proof that Iran is busy in the production of atomic warheads. The economic sanctions on Iran and 5+1 negotiations are only to make Iran forgo its right to enrich uranium to be used for power generation mainly.
According to an AP report over the past two months, the Defense Department has notified Congress of possible deals totaling more than $11.3 billion to Gulf States Qatar and Kuwait, which are seen as some of America’s critical front-line partners in containing Iran.
The proposed sales including Patriot missile batteries and Apache attack helicopters are still modest compared with massive Gulf purchases such as Saudi Arabia’s $60 billion package last year. That deal included more than 80 new F-15SA fighter jets, missiles, radar warning systems and other equipment.
Under an elaborate plan fear is being created among the Arab monarchies about possible Iranian retaliation. According some unconfirmed news US National Security Adviser Tom Donilon briefed Israeli officials on possible US attack plans if diplomacy and sanctions fail to force Tehran to rollback its nuclear enrichment program.
To create the hype Washington plans to keep at least 13,500 troops in Kuwait with an expanded mission as a potential rapid-reaction force for the region. The Pentagon also has scores of warplanes and other assets across the Gulf, including air bases in the United Arab Emirates and Saudi Arabia.
At sea, the US Navy plans to lead maneuvers in September that include minesweeping drills — a clear response to Iran’s threats to block oil tankers from passing through the Strait of Hormuz at the mouth of the Gulf in retaliation for the tightening Western sanctions.
The US is also boosting its Gulf flotilla, directed by the Navy’s 5th Fleet in Bahrain. Among the additions a floating assault base aboard the retrofitted USS Ponce and accelerated deployment of the aircraft carrier USS Stennis to ensure two carriers are in the Gulf region at all times.