US Hegemony in South Asia and MENA 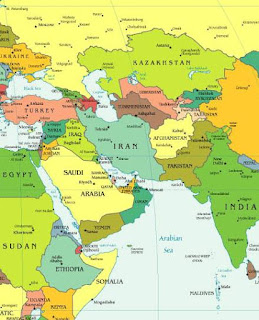 According to media reports US ambassador-designate to Pakistan Richard Olson expressed that Islamabad has moved away from the old concept of finding strategic depth in Afghanistan and stressed encouragement for the positive development in the South Asian country’s strategic thinking.
Appearing in his confirmation hearing, Olson, who until recently served as a senior diplomat in Kabul, cited to Capitol Hill Pakistani actions as well as the avowed policy statements by its leaders to move away from the old thinking.
His apprehension may be right but he must also listen to others rather than basing his strategy on CIA-based information. Over the years CIA had been proved wrong repeatedly, may be because its designs conflicted with the policies of the democratically elected representatives of the largest democracy of the world. The CIA seems to be working on global agenda to make countries subservient to the US policies, including providing funds and arsenal to rebel groups around the world in the name of ‘regime change’.
For the information of designate ambassador there is a growing feeling that Pakistan has remained subservient to the US administration and never allowed to improve relationship with USSR, China and even India. At the best it may be said that Pakistan enjoys good relationship with China, only because it has been helping Pakistan in overcoming its economic problems. Pakistan was put against USSR in Afghanistan and India has been pampered and used against Pakistan and China.
Over the years Pakistanis have realized that their role has been reduced to ‘mercenaries’ killing Afghan and the US has been actively trying to create Indian hegemony in the region. This impression was further consolidated when the United States offered India ‘nuclear technology for civilian use’ but denied the same to Pakistan. Despite fully cognizant of the fact that Pakistan’s economic growth is constraint by energy shortage, the country is neither allowed buying oil, gas and electricity from Iran nor given money to construct hydel projects.
On the question of doctrine that Pakistanis over the years have talked about strategic depth and, one of the ideas that Afghanistan represents strategic depth against a potential conflict with India Olson said “My sense is that the Pakistani military and Pakistani government has moved away from that.”
The reason is obvious because President Obama visited India and termed it ‘strategic economic partner’ but keeps on saying ‘Pakistan should do more’ and at times voices were raised to stop assistance for Pakistan and declare it a ‘terrorist country’. The United States has created Taliban, a new breed of mercenaries to fight against USSR and if it can’t put the genie back in bottle Pakistan should not be blames.
There is also a growing realization in Pakistan that if USSR assault on Afghanistan was an attempt to get access to ‘warm waters’, the US occupation of Afghanistan is for getting control on production and supply of drug. Those Taliban who don’t support cultivation of poppy are termed ‘bad’ and those who have agreed to become partner in trade ‘good’. One of the reasons for stopping Nato supplies was aimed at stopping supply of chemicals under the disguise of goods of strategic importance for the combat soldiers.
The operation by Pakistan army is northern areas is aimed at weeding out infiltrators mostly coming from Afghanistan. Balochistan has also become centre of covert operation of foreign intelligence agencies against Iran. The much talked about Baloch uprising is to facilitate an independent Balochistan, comprising of three slices on each from Pakistan, Iran and Afghanistan and creating a hostile country against Iran, which has survived more than 32 years of economic sanction and refused to bow down before the US hegemony in the region.