Will US pull troops out of Afghanistan? 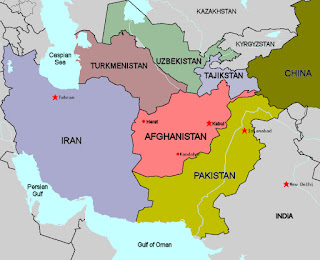 A question is often asked by the citizens of countries directly or indirectly affected by the Proxy War in Afghanistan; will United States pull out its troops occupying the country after 2014?
The overwhelming perception is, it will not. To understand this it is necessary to explore reasons why the country is being occupied under the disguise of Nato and ISEAF.
One point is very clear that the objective was not to liberate Afghanistan from the control of USSR or Taliban but to occupy it for economical and political reasons. Presence of Al-Qaeda was not an excuse for attack. Iraq was also not attacked because of Al-Qaeda but oil. Neither Afghanistan nor Iraq had attack the world trade center.
One could find two possible reasons for occupying Afghanistan; valuable metals and geopolitics. Studies conducted by USSR showed that trillions of dollars worth precious and rare metals are present in Afghanistan.
Being the super power United States maintains its military dominance by brining countries all around the world under its hegemony to combat enemies. Afghanistan has an important place in the US foreign policy due to common borders with Pakistan, Iran, China and many oil and gas rich Central Asian countries.
After the Islamic Revolution Iran is being projected the biggest threat for the world, especially Arab monarchies and more recently for its nuclear program denouncing US hegemony. United States is planning for the ultimate day when troops will be deployed in Iran to takeover its nuclear assets. It needs an outpost near Iran and Afghanistan is the ideal country.  The two countries share a long mountainous border, which is virtually impossible fully monitor and defend.
China is the second most powerful superpower, which is likely to surpass the gross domestic product of the United States by 2020 and become world’s strongest economic superpower.  United States already has outposts in Taiwan and South Korea, Afghanistan gives them a third root of attack should it be necessary.
Afghanistan was a hostage of the Cold War. The United States supported Pakistan and the USSR patronized Afghanistan and India against Pakistan. After Islamic Revolution in Iran in 1979 the Soviet leadership anticipated that in order to compensate its defeat in Iran the United States might seek to expand its influence in Afghanistan.
The USSR believed that getting control over Afghanistan could give it a perfect foot hold in South Asia and the Middle East. It would have access to a new ocean and proximity to the vast oil riches of the Middle East. There are no warm water ports in Afghanistan, but getting control over the Khyber Pass, an ancient trade route to China on the East and one step closer to Iran and Turkey on the West and Pakistan on the South, all with warm water ports.
With the disintegration of USSR, despite having tons of lethal arsenals and China focusing on its economy, the sole surviving super power seems too ambitious in establishing its hegemony in South Asia and MENA and Afghanistan appears to be the most ideal outpost. Therefore, probability of end to the US occupation of Afghanistan is hoping against the hopes.