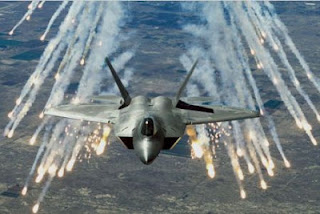 Over the years it is being said that the United Sates creates most of the conflicts around the world but very few people are able to understand the underlying motive. It is the lust to keep its arsenal factories running at highest capacity utilization.
My second blog posted on 26th June highlighted this aspect. One of the latest reports by Reuters provides the latest numbers, though these pertain to 2011 and a lot has changed lately.
The report says that during 2011 the US arms sales touched record level US$66.3 billion, mainly because of $33.4 billion sales to Saudi Arabia alone. Other key buyers included United Arab Emirates and India.
The US sales were nearly 78 per cent of the global arms sales, which rose to $85.3 billion during 2011. The previous US record sales of $38.2 billion were achieved during 2008.
While Washington remained the world’s leading arms seller, nearly all other major suppliers, except France, recorded decline in sales during 2011. France signed arms sales valued at $4.4 billion in 2011, up from $1.8 billion a year earlier.
Russia, the world’s number two arms dealer, saw its sales nearly halved to $4.8 billion in 2011. The four major European suppliers — France, the United Kingdom, Germany, and Italy — saw their collective market share drop to 7.2 per cent in 2011 from 12.2 per cent a year earlier.
Saudi Arabia emerged the biggest arms buyer among developing countries, concluding $33.7 billion weapons deals in 2011, followed by India with purchases of $6.9 billion and the United Arab Emirates with $4.5 billion. A point worth laughing is ‘Iran is fueling arms sales especially to Saudi Arabia and the United Arab Emirates’.
The three major beneficiaries of the arms sales were Boeing, United Technologies and Lockheed Martin. The sale of $33.4 billion to Saudi Arabia comprised of 84 Boeing F-15 fighters, dozens of helicopters built by Boeing and Sikorsky Aircraft, a unit of United Technologies Corp.
The sale of $3.49 billion to the United Arab Emirates comprised of Lockheed Martin Corp’s Terminal High Altitude Area Defense, an advanced missile shield and $940 million for 16 Chinook helicopters built by Boeing.
The United States seems to be following a unique strategy whereby extreme volatile situation in created in the Middle East and imposition of economic sanctions on Iran. This helps in keeping crude oil price high. However, all these petrodollars are bagged by selling arms to oil rich countries.
The only point of concern is that the arms sales are on the rise due to growing animosity among the Muslim countries, especially Arabs vs. Iran. In the past Iraq assaulted Iran and the war continued for a decade.
During this war Saudi Arabia and Kuwait gave billions of dollars to Iraq to wipeout Iran from the global map. The stage is being prepared once again for a better coordinated assault on Iran but all remain shy of the nuclear capabilities of Iran. Though, Israel keeps on talking about attacking Iran, threat of nuclear war makes all jittery.