Jirga approves action against criminals claiming to be Taliban 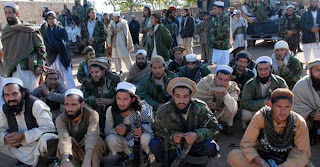 In my last post it was mentioned that Taliban have taken people living in various areas hostage and are also using them as ‘human shield’, this point has been substantiated by some news reports.
Reportedly, the local Taliban and elders of Uthmanzai tribe have formed a joint lashkar to take action against those elements, who are involved in target killings, kidnappings and attacks on security forces.
The 100 men strong lashkar was formed at a jirga held at Anghar Kallay near Miramshah. The jirga was attended by Taliban and Uthmanzai elders. “Kidnappers, terrorists and those involved in attacks on security forces should leave North Waziristan Agency immediately,” the jirga decided unanimously.
The jirga authorized the lashkar to launch an action against criminals, kidnappers, target killers and those, who were attacking security forces. The decision was taken keeping in view the growing incidents of kidnappings, and killing of tribal elders and attacks on security forces during the past few weeks. Recently, two tribal elders — Malik Mashar Khan and Malik Noor Din Darpakhel — were targeted killed.
The term Taliban was used first time for students of Madarsas who decided to initiate Jihad (Holy War) against the USSR army. Those who were against occupation of USSR and also against the presence of US led Nato forces in Afghanistan. These people have been joined by thousands of revolutionaries who term United States the biggest terrorist and wish to cause dent by attacking strategic installations and Nato soldiers.
Those fighting against the US have been termed Bad Taliban and those serving its interest are called Good Taliban, but the fact remains that the real Taliban hate the occupiers the most and inflicting huge losses to Nato forces. Those protecting the US interest kill innocent people and take pride in claiming the responsibility only to defame the real Taliban fighting against the occupiers.
To justify occupation of Afghanistan, United States is funding people and proving them arms and maintaining state of war. One of the reasons for the recent upsurge in incidents of killing and sabotaging is that the time has come to pull out the troops. United States wish to keep troops in Afghanistan till the time it attacks Iran.